skip to main | skip to sidebar

A few things I have been feeling grateful for lately.

Posted by Promises to Keep at 9:19 AM 0 comments 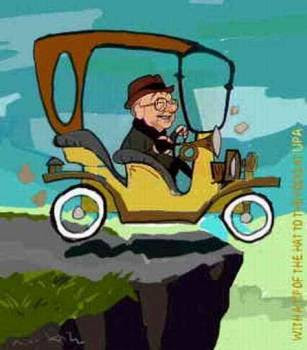 This is what I affectionately call my husband. He does get offended by it so I do it in secrecy. This weekend he 2 really bad Mr. Magoo moments!
First one came on Saturday. I needed to empty my memory card for my camera so I could take more pictures at Katy's Tea Party, celebrating her 6th birthday, so I headed over to Westminster an hour ahead of them. Giving him instructions on what time to leave and where to go. I specifically told him Sugarplum Fairies was across the street from O'Lourdan's. A restaurant we have been to at least 3 times. I asked him if he knew where I was talking about and he said yes. So off I go....Everyone is at Katy's party except Katy. They were late, because he got lost with directions I had given him. Why? His explanation was he only knows of one tea room in Westminster, The Gypsy Tea Room, over by the hospital. I said that is fine but I told you it was across the street from O'Lourdan's. I left it at that not wanting to cause a scene at my daughters tea party.
Then, when we were coming home late from my mom's last night, keep in mind a trip we have made many times since we lived here in Maryland. I doze off somewhere between the Delaware/Maryland line and Elkton and wake up in Baltimore just as we are passing Eastern Ave. and John Hopkins Bayview. I say to him "You missed the exit!" You notice I didn't say you JUST missed the exit, because he was happily driving along miles passed where we would have normally turned off 95. He says "No I didn't!" As I am handing him $2 to go through the Harbor Tunnel, I ask "and how many times have we taken the tunnel home?" His reply "oh." I sit in silence thinking "if you can't say anything nice don't say anything at all." To the point it becomes a mantra, and mentally I am saying it over and over again in my head. Then as we are on 695 coming in on the opposite side we normally do, he says to me "I actually think this way is shorter." Are you kidding me? I have just spent the last 30 minutes in silence trying not to loose my cool. Still trying to take the "high" road while he is taking the long road! I simply say STOP.
I have often wondered how a man that is so smart have such a horrible sense of direction! This is a man who has done DNA cloning but still has trouble finding his way to Westminster!
You know it must be LOVE!

Posted by Promises to Keep at 7:20 AM 0 comments

So it is probably no mystery or surprise for those who see me everyday that I have lost weight. I have hit the 75 pound mark! That is one giant and loud Whoo Hoo! During this journey I have said all along that I am going to have plastic surgery, when I hit goal(I am not there yet). At least a tummy tuck and maybe perk up the girls somewhat. But I have to admit that I am thinking my new body is looking great. I don't think I would of ever thought this time last year that I would enjoy seeing the extra skin flapping on my arms! I have already said I won't get it removed. So every morning when I check out my skinnier naked body and weigh myself, I find myself becoming equally attached to the empty skin that hangs from my waist. Also, my butt, I have extra skin there too, at the bottom, I pinch it every once and a while(I would let my husband but he thinks it is an invitation for something else). Plus this a body that has weather many storms, has been with me through it all. These imperfections are almost like badges of courage or medals of honor. I am kinda proud of my arms and my toosh they remind me of how far I come and where I don't won't to go back to.

So lately it has left me wondering do I really need to change anything? I feel lighter. I like how my clothes fit, although I am waiting patiently for someone to turn me in to "What not to Wear." I know I am not by society standards of beautiful, but at 42 I am for the first time comfortable in my own skin so I must be beautiful.

A talented and gifted friend from our last ward is actually the one giving away the quilt. She is trying to raise awareness for Urban Chickens in Philadelphia. What the means is that families in the city will be able to have up to 4 laying hens to have eggs. They are trying to get this past by signing the petition and you don't need to be a resident of Philadelphia to sign.
Here is her blog:
http://www.homelyanimal.blogspot.com/

WHY I LOVE LIVING IN MARYLAND

It was about a month ago, that I posted about how wonderful and ideal it was living in PA, well since then I have had some wonderful experiences with neighbors, friends, and community living here in Maryland.

I will start with neighbors, Katy started playing with a little girl around the corner and about 4 house down. They pretty much play everyday weather and schedules permitting. I have also gotten to know her parents and some of their neighbors. They have invited us to a 4th of July party and another BBQ! The mom's walk in the evening and after I recover some will join them when I can.

MG and Katy's school is just a wonderful and loving place! I am so glad I have gotten to be apart of that school family. To save the big long story, we have decided to home school the kids next year(that can be another post). Anyway, they have really reached out to us willing to work with us, have helped us and have offered their full support.

Friends here, what can I say? Just as golden as the ones in PA. Going through these surgeries(again that is another post) I have be given their gifts of love and friendship, kind words, encouragement, support, and let's not forgot the meals and one beautiful basket of fruit! I have been able to stay positive, my faith has been able to stay strong and focused and through them I have felt the love of our Savior. I am not alone.

I wouldn't have wanted to be anywhere else.

Posted by Promises to Keep at 5:56 AM 3 comments

I was told last week that I live in a sheltered world. That I surround my self with people either from church or from school. And that I don't know what it is like out in the real world. Mmmmm, it has made me think......

Well that is true, but I also surround myself with old friends and my family all of whom I love dearly. That is why I like to be around them. And yes it seems like I am either preparing to do something at church or for school in my "free" time. Most of my days are consumed with busy children and keeping a home for my family. I do try to be selective on what I bring into my house that could influence my kids and family. I do like to read, go to movies and watch tv but there is never enough time so I chose wisely and only partake of those I really want to see, read, or do. There is only so much time. So in making these choices maybe I have sheltered myself, after all I can never stay awake late enough to watch the 11pm news(I figure if it is really important they will interrupt prime time programing).

So in this sheltered world I have created there is a happy mom who loves her children and handsome husband. A little girl who sings, skips, dances, and wears red lipstick. A boy who is smart, likes science, scouts and his dog. A Dad who goes off to work every day to support his family, let's his wife think she is a princess and treats her accordingly, loves his children and is a role model to them.

Mmmm...I have been thinking what a wonderful life.

Oh, and by the way one of my guilty pleasures is Bravo's series "The real housewives of ..." so I do know what it is like in the "real" world and I don't think I am missing anything.

1. the last day of school is tomorrow!
2. my biopsy appt.
3. the rain: my flowers are blooming

Posted by Promises to Keep at 3:26 PM 0 comments

So I pick up MG today from school and he gets in the van and I ask "How was your day?" Head down he replies "I gave in to temptation." I smile and ask "Did you kiss a girl?" He says "No, and I don't know how much longer I can resist that one either." He then explains that today they made some kind of atom or molecule out of gum drops and he was bringing it home to show his Dad but ate the gum drops! I think I have the cutest boy ever!

Posted by Promises to Keep at 1:07 PM 2 comments

Blogs I love to Read